I’m back! After about a month of vacation for the Chinese New Year (Happy Year of the Dog everyone) I finally found myself back at school and am currently readjusting to being on a work schedule.

My winter vacation consisted of two parts.  I traveled to Japan with my mom and traveled home to Chicago to relax and catch up with friends and family. And both were great! 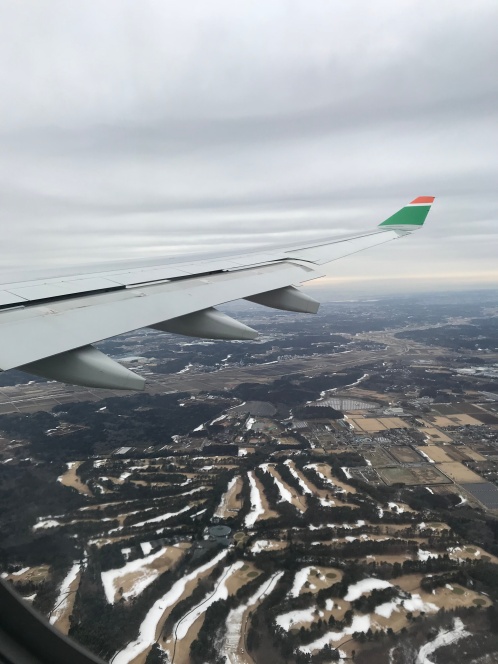 The day after Fulbright’s midyear conference ended, I hopped on a plane to Tokyo where I met my mom. At this point I had been in Taiwan for six months, which is the longest amount of time I have ever gone without seeing my family. I got to Narita Airport first, and was so excited when I saw my mom walk out of the international arrivals gate!

Neither of us had ever been to Japan before (this was my mom’s first trip to Asia) so we navigated the airport together and boarded a train for the city center, hoping we wouldn’t get lost and that our inability to speak Japanese wouldn’t be too much of a problem.

Thankfully,  although the public transport system in Tokyo is vast, I thought it was pretty easy to use. All of the signs are in English, and the ticket buying machines also have an English option.  I also ordered pocket wifi for us, which was good in a pinch if we needed to google where something was.

And, despite the fact that neither my mom or I speak any Japanese, we had no trouble getting around. English is widely spoken in Tokyo and most people would look at us and start immediately speaking to us in really good English. Based off the six days I spent in Tokyo, it seems that more people speak English there than they do in Taipei. 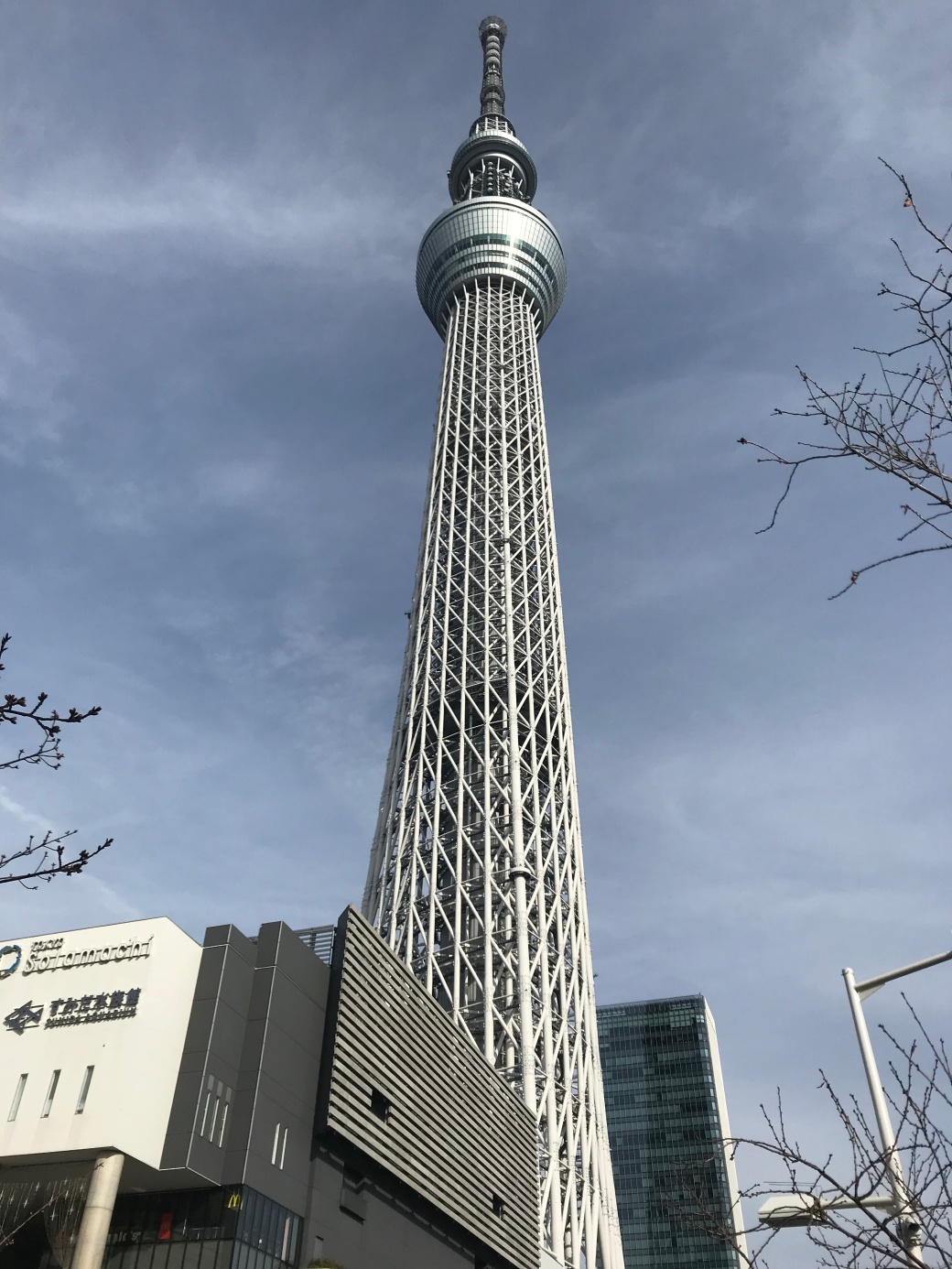 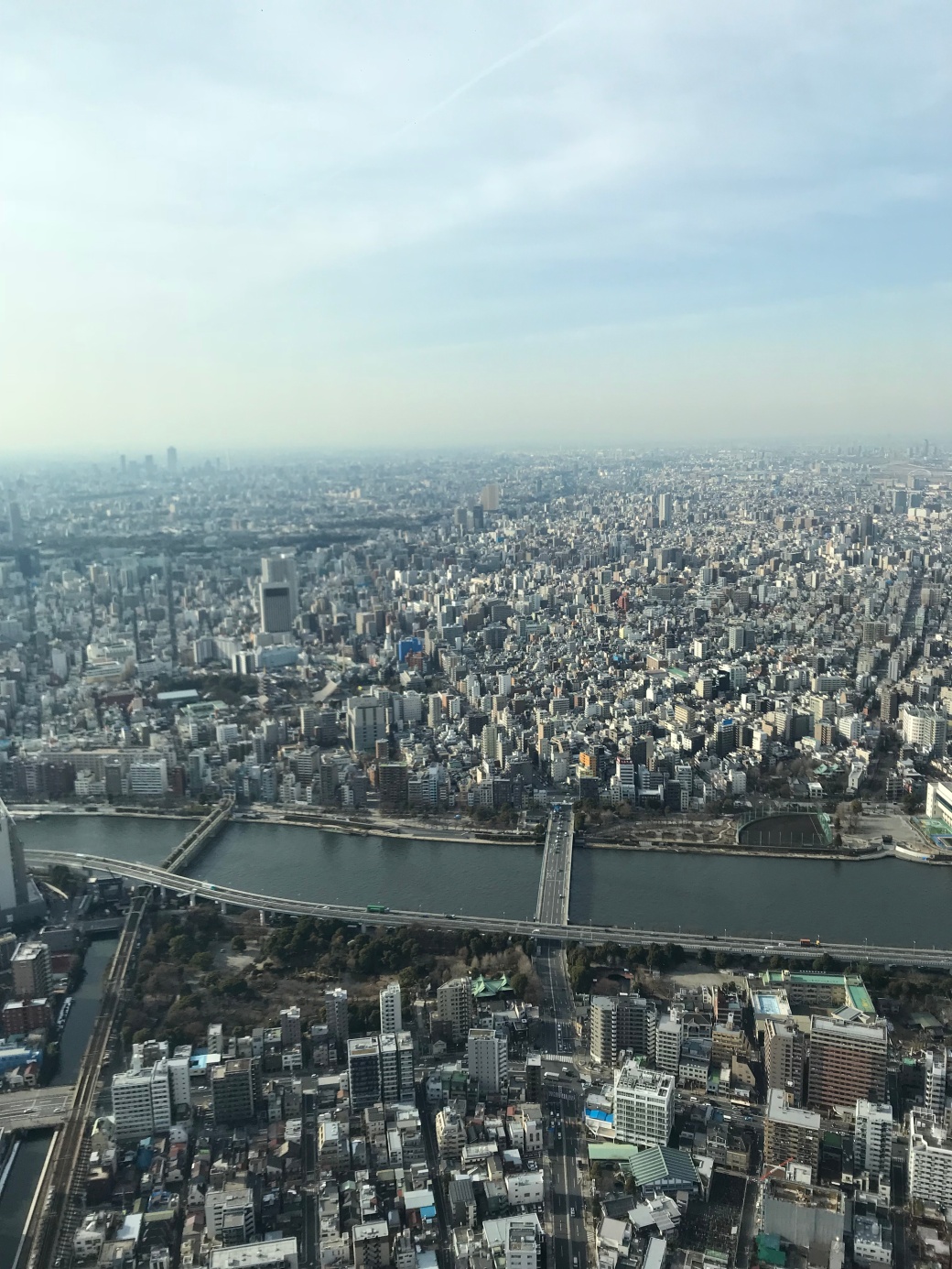 Going to the top of the Tokyo Skytree, you realize that Tokyo is pretty freaking big no matter which way you look.

I was really impressed with Tokyo. Japan is a country that has always been on my bucket list and that I think holds a special place in the hearts and minds of my generation, and I think a lot of that has to do with anime and video games. I mean come on, this is the country of Pokémon, Mario, and Zelda.  Who wouldn’t want to go to the place where Pikachu originated?

I’ve always been a video game nerd, and I can actually trace some of my first impressions of Japan back to video games.  There’s a level in the snowboarding game SSX Tricky, which I played on the Nintendo GameCube, that’s called “Tokyo Megaplex.”  The level presents a crazy technologically advanced obstacle course for players to ride through. And, although my 10-year-old self at the time realized that getting thrown into the air by giant wind turbines wasn’t a realistic snowboarding scenario, the image in my head of Japan as a country with one foot in the future stuck with me.

The real Tokyo isn’t quite as advanced as the one in SSX Tricky, but it is still an incredibly modern city with too many things to do to count.

Top: The park around the Imperial Palace. Bottom: Tokyo Station, where both the hotel and actual station are.

My mom and I visited most of the major tourist attractions, and they did not disappoint. Despite Tokyo’s massive size, everything seems to run very smoothly and in a very orderly fashion. And, parts of the city are even quiet. My mom and I spent a morning walking around the park path that encircles the Imperial Palace (it’s cool even though you can’t really see the palace), and commented that we didn’t hear any car horns blaring, despite the fact that many were driving by.  I’ve never thought of the streets in Yilan and Taipei as particularly loud, its just that the streets in Tokyo are particularly quiet. 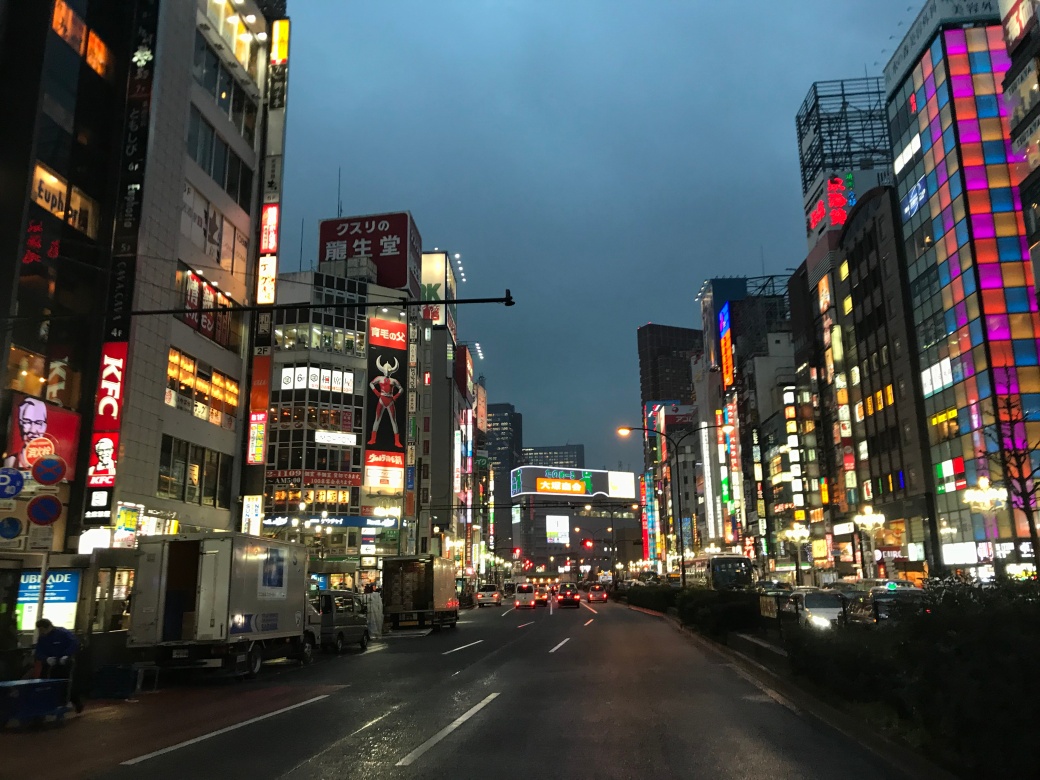 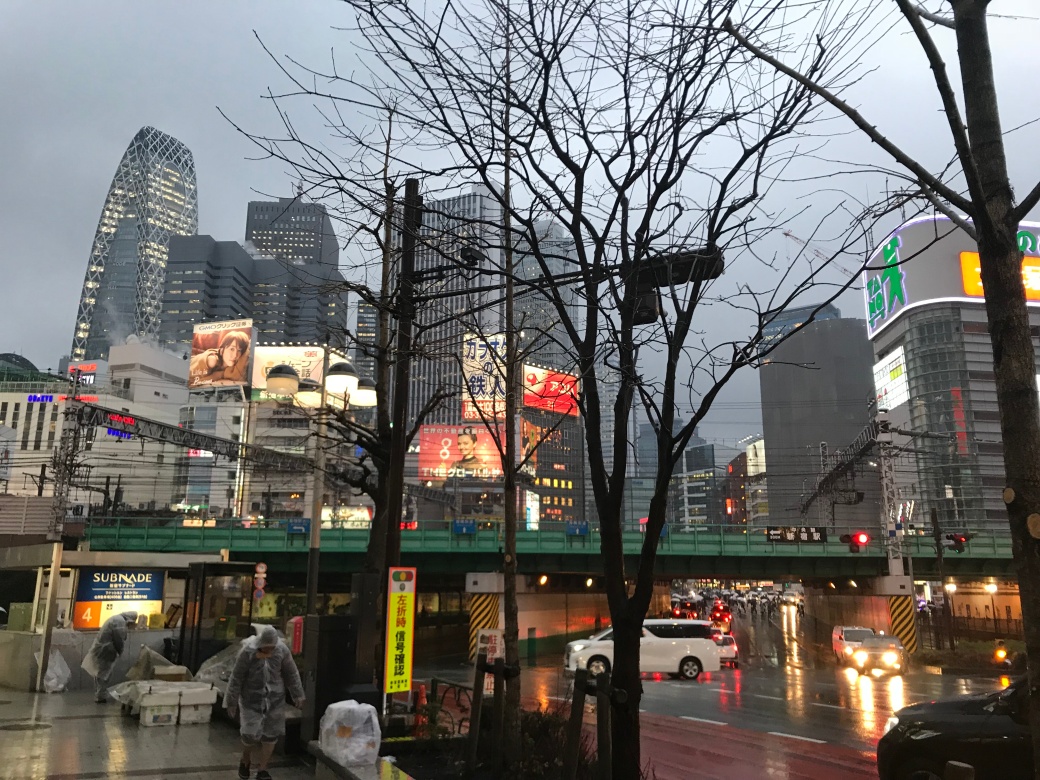 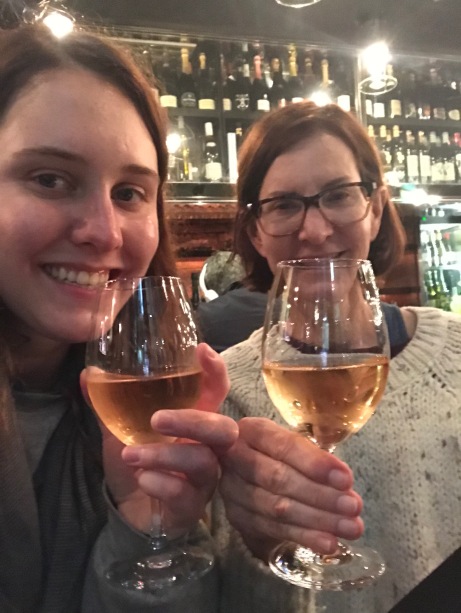 It’s all bright lights in Shinjuku. Good thing my mom and I found a wine bar where we could hide from the rain.

In addition to the Imperial Palace, my mom and I went to fast-paced and flashy Shinjuku, where we discovered a cozy wine bar, and I got my geek on in Akihabara, where I went into some retro gaming stores. I wanted to buy everything, but my sole souvenir was a version of Pokémon Crystal for the GameBoy Advance in Japanese. I’m still not sure how I’m going to play it since I don’t know Japanese, but it just seemed like too good of a souvenir to pass up. 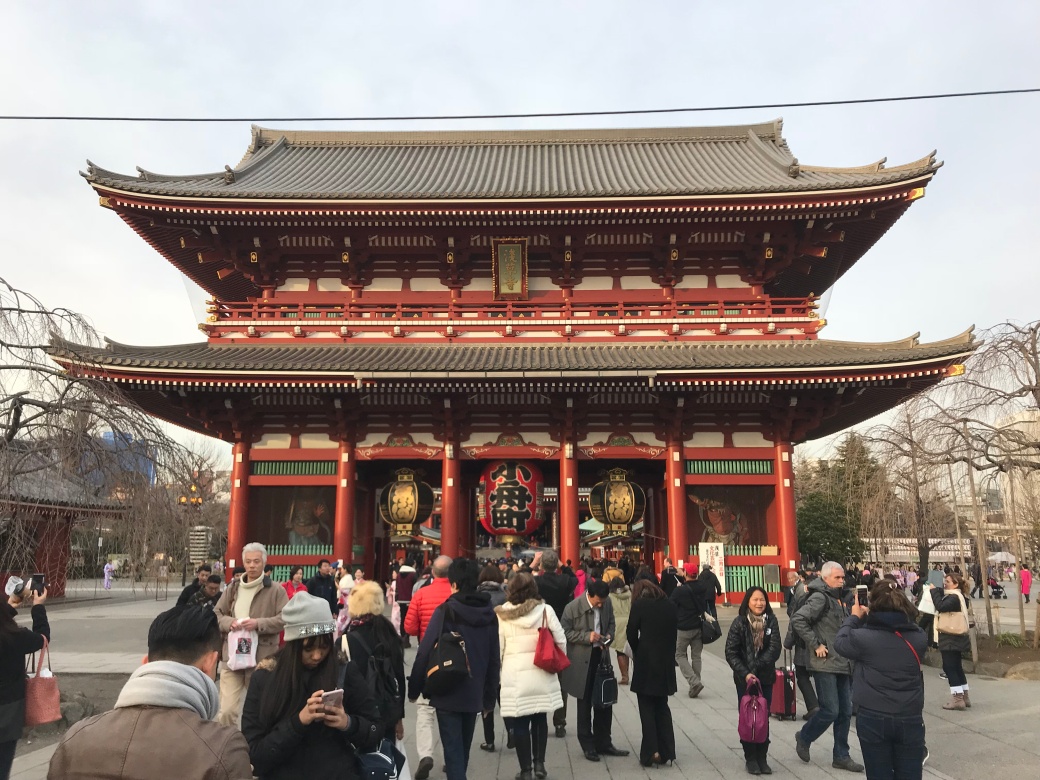 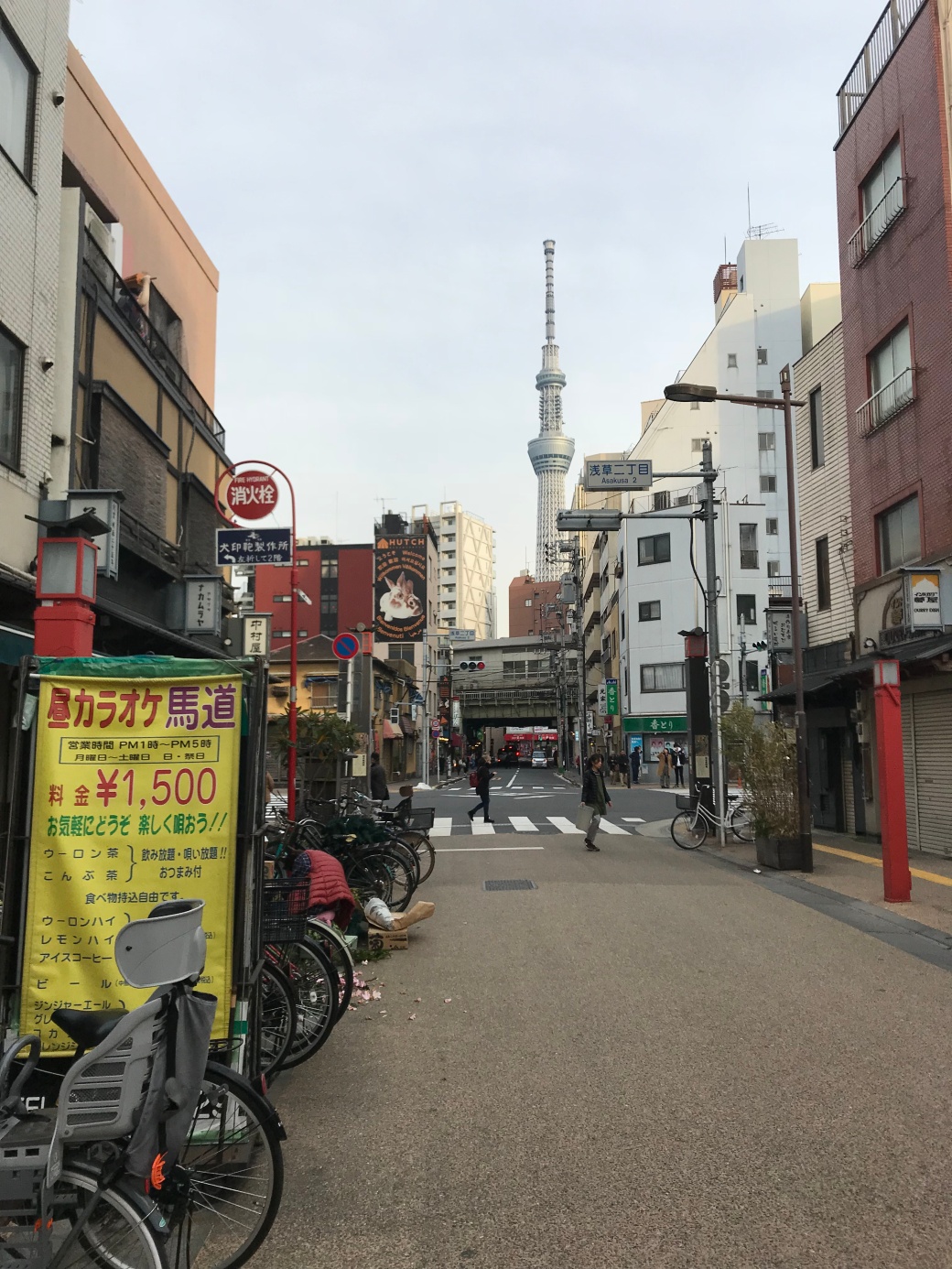 We also did some window shopping in Ginza, Tokyo’s version of Michigan Avenue in Chicago, visited the Senso-ji temple in Asakusa, went to the top of the Tokyo Skytree, ate crepes in Harajuku, and spent an afternoon having tea in the Lobby Lounge of the Tokyo Station Hotel where we stayed. And, I crossed a major item off my bucket list when I took a shameless tourist photo at Shibuya Crossing, which is supposedly the busiest intersection in the world.  I feel like I only scratched the surface of Tokyo, and would love to go back and visit some of the less touristy areas. That being said, I really enjoyed doing the touristy things, especially because I think it was a good way to learn the basic layout of this ginormous city. 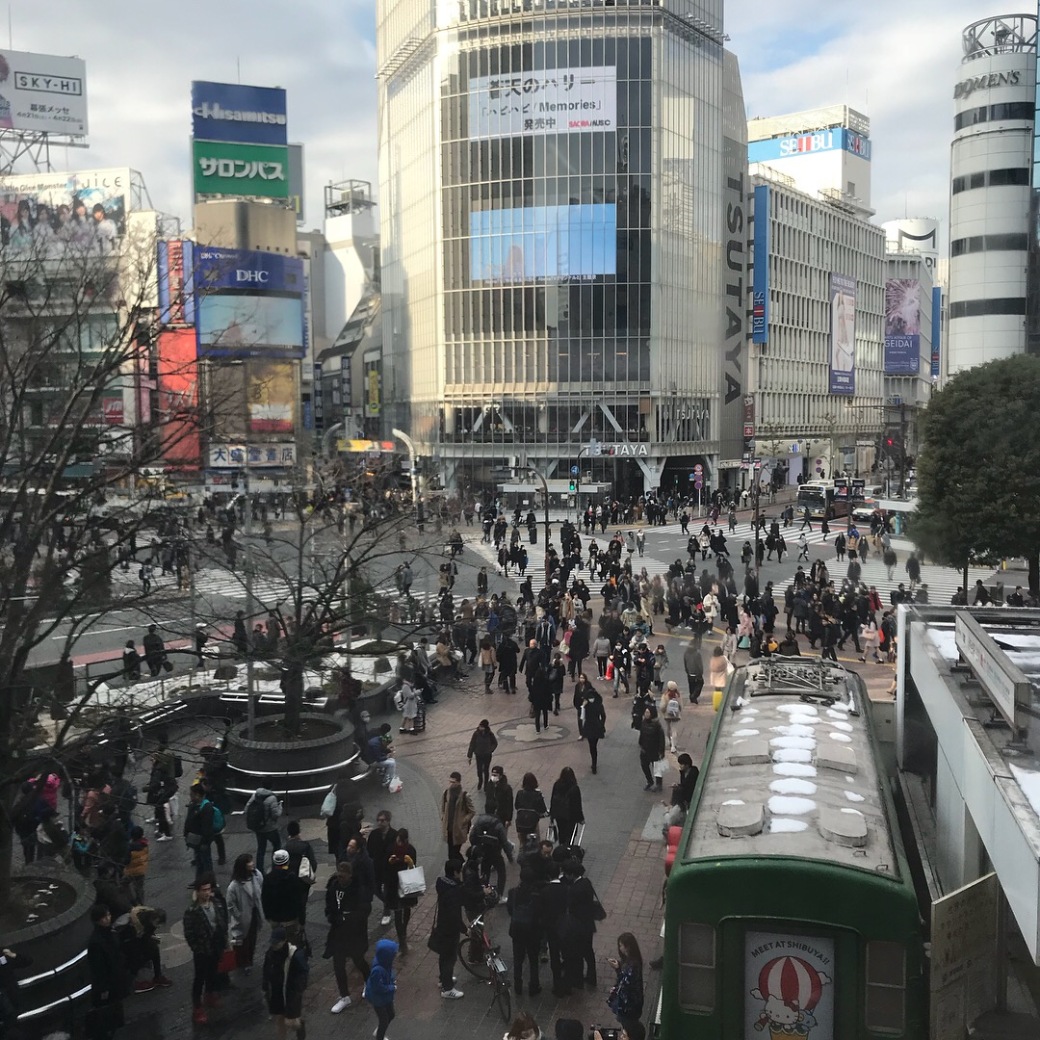 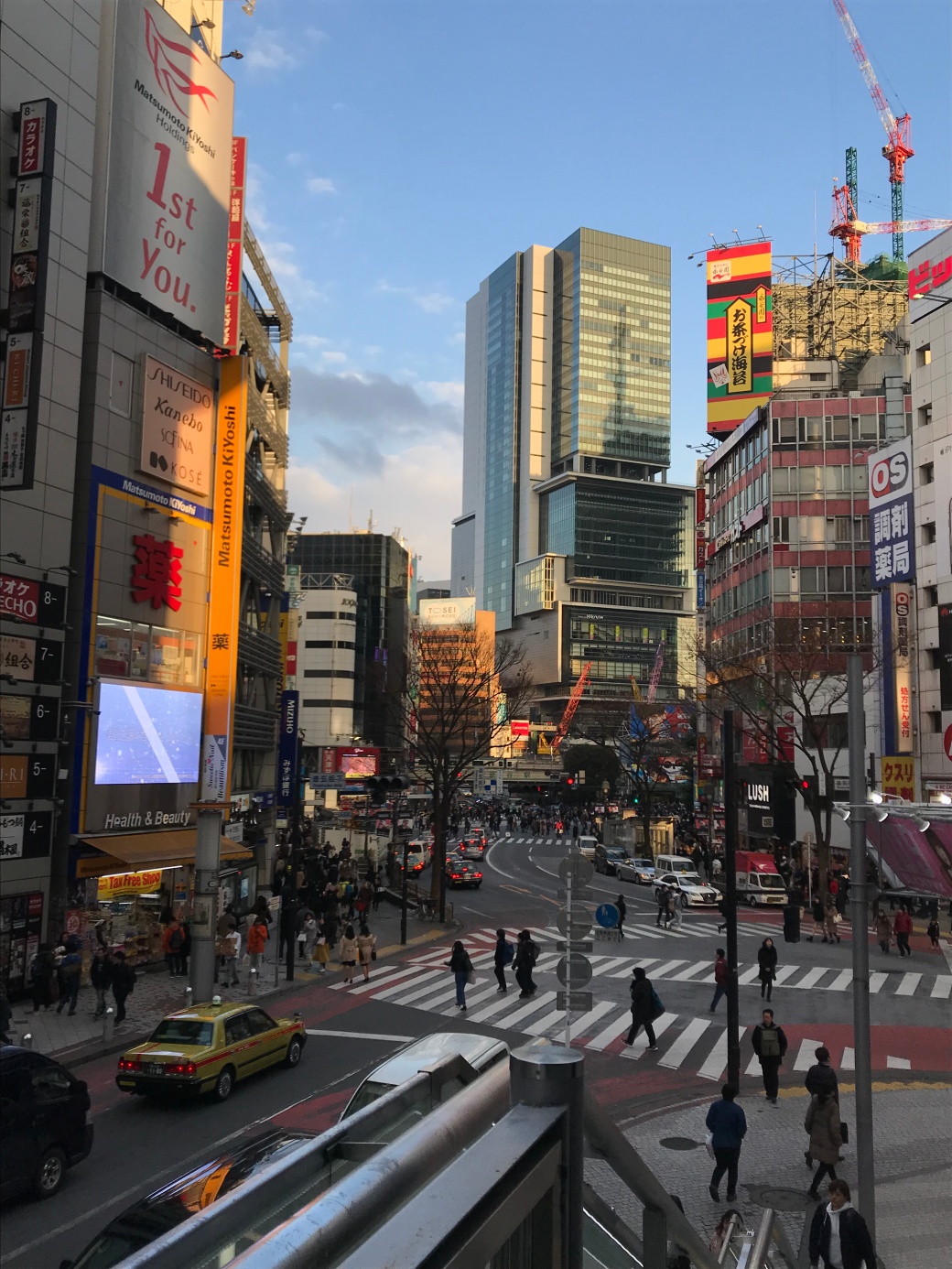 Tea at the Tokyo Station Hotel and Crepes in Harajuku were just some of the delicious things I ate and drank in Tokyo.

When it came to eating, I was surprised by the amount of international food in Tokyo.  After my mom discovered on the second day that sushi was not her cup of tea, we searched for other food options. And we did not have to look far.  Food is everywhere in Tokyo, in every form and in every price range you can imagine. We stayed at the Tokyo Station Hotel, which is connected to the actual Tokyo Station, where trains come and go to all parts of Tokyo and Japan day in and day out. We would often wander around in the station (train stations in Tokyo are like cities unto themselves) and grab a bite to eat along with the locals who were coming and going from work.  We ate Japanese food, Thai food, Italian food, and American food. A lot of the restaurants we went to were cheap holes in the wall, but the quality of the food was really good. I don’t think I had a bad meal the entire time I was in Tokyo. 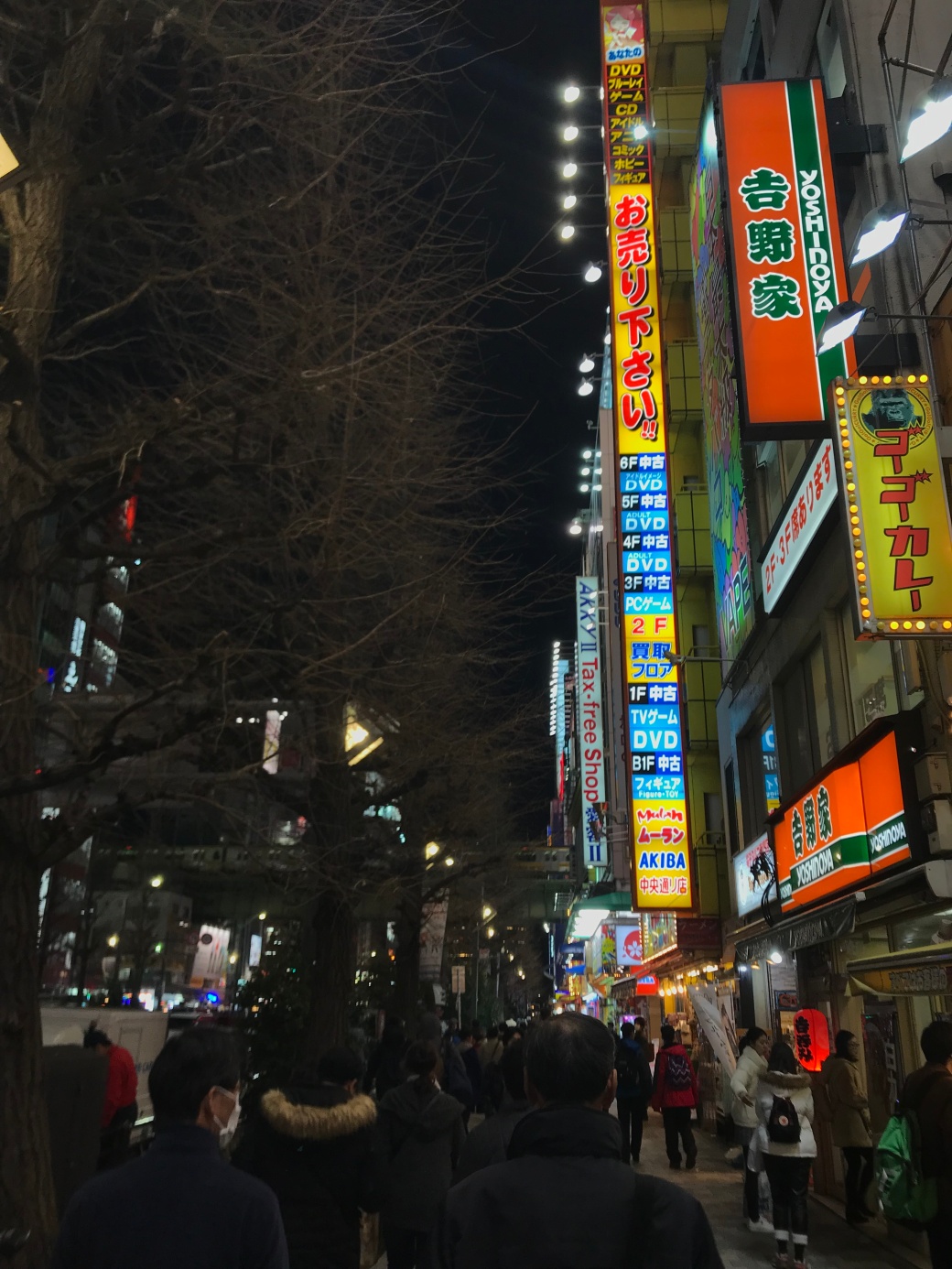 Tokyo is definitely a place I want to go back to, and there’s so much of Japan I still want to see, too. My mom and I spent six days in Tokyo, and I feel like we could have spent six weeks there and still not have been bored.  Which, I suppose, is a good reason for me to try and go back in the future!