One of the great things about living in a new country is learning about different cultural traditions, and getting to celebrate new holidays with the friends you’ve made.  But sometimes, the downside is that you don’t get to celebrate the holidays you’re accustomed to with your friends and family back home.  I’ve heard that when you travel for an extended period of time or live abroad, feelings of homesickness often hit during the holiday season.

I found this happening to me last weekend.  A few days after Thanksgiving, I was walking around Luna Plaza, the local indoor mall I live near.  Living near there is great, because you never know when you’re going to want to go see a movie at the theater or have a craving for the Dunkin Donuts pre-ground coffee that you can only find at Carrefour. As I walked in, Christmas music started playing on the speakers, and I noticed ornaments and tinsel decorating the mall.  It reminded me of walking through Oakbrook Mall back home, and made me wonder who I was going to watch Love Actually with this year since my mom and I aren’t on the same continent.

Some holidays, like Christmas, are celebrated here.  It’s not celebrated by everyone, and it doesn’t always have religious connotations here, but some parents do buy gifts for their children on Christmas and have a small celebration.  That being said, we don’t get Christmas off of school.

I’ve found that many Taiwanese people have some knowledge of American holidays like Halloween and Thanksgiving, even though they don’t celebrate them.  But, although trick-or-treating through neighborhoods is not a thing here, kindergartners at one of the elementary schools I work at dressed up on Halloween, had a costume contest, and trick-or-treated to different classrooms around the school. Many American holidays are known about or observed to varying degrees here.

But, even though I felt a little homesick walking around the mall, I feel like I got lucky this holiday season, because I got to celebrate Thanksgiving not one, not two, but three times!  A few weeks ago all of the Fulbright ETA’s in Taiwan gathered in Taipei for a Thanksgiving dinner.  It was a great night filled with some yummy food and catching up with the ETAs from other locations. 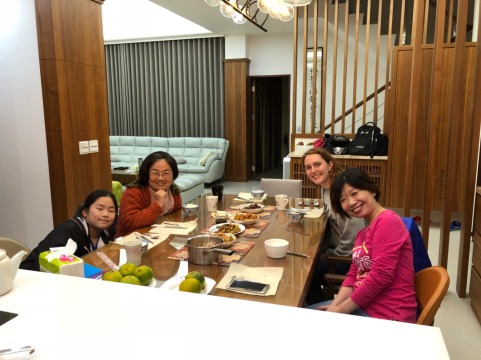 My second Thanksgiving was celebrated with one of my friends from work.  A coworker invited me and my co-teacher Ellen to her house on Thanksgiving day for dinner.  She knew it was Thanksgiving in America, and even though it wasn’t a holiday she celebrated, she wanted to celebrate with me because she knew I was missing home!  It was incredibly thoughtful, and I had a wonderful time. 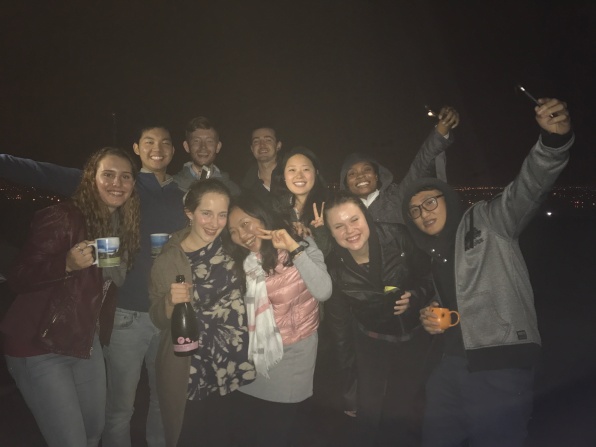 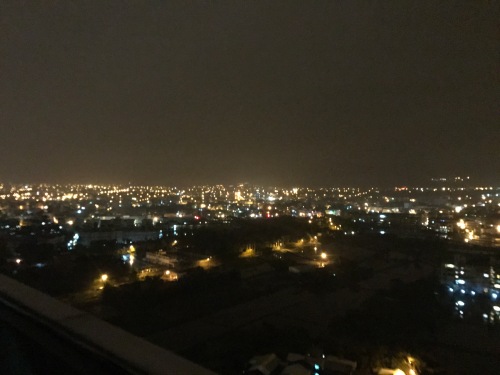 Celebrating with the local ETAs. Not too shabby of a view.

And finally, the day after Thanksgiving, the Yilan County ETA’s gathered at GTX (one of the apartments in Luodong) for our own Thanksgiving extravaganza.  We ate American food galore (although no Turkey), and everything was drenched in cheese, a food I feel is seriously lacking in Taiwan.  The night ended with all of us on the roof of GTX singing karaoke to Smash Mouth’s “All Star” while popping champagne.  Definitely a Thanksgiving to remember. 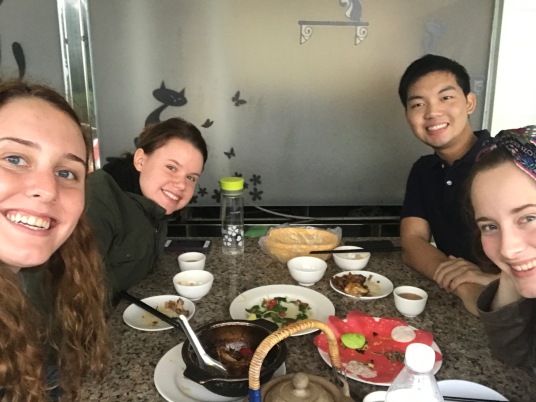 We hiked up to the highest point in Maokong to have lunch and tea!

One of the other exciting things I’ve done over the past few weeks is ride the Maokong Gondola in Taipei.  This was something I had wanted to do since coming to Taiwan, and I finally had the opportunity when we were in Taipei for the Fulbright Thanksgiving dinner.  You take the Brown line MRT to the Taipei Zoo stop, and then walk a few blocks to the gondola, which you get to take up a mountain!  Maokong is known for its locally grown tea, and its a popular tourist spot to enjoy beautiful views while eating lunch.  Even though it was rainy and a little chilly, we had a great time, especially because we had some steaming hot tea to warm ourselves.

Take the MRT and hop on the gondola!

Taipei is growing on me as a city.  At first I thought it seemed big and anti-personal, but now that I’ve been there a few times, I’m starting to learn my way around.  The MRT system is easy to use, especially if you have a swipe card that allows you to just scan the card on your way in.  And it doesn’t hurt that all of the MRT signs are in English as well as Chinese.  There’s still tons of the city that I haven’t explored, but I want to take better advantage of my location so close to the city as the year continues.

I’ve also been continuing to run over the past month or so.  Even when it’s rainy out, I try to make myself get some fresh air and head to the running paths.  Here are some of the views from my usual path. 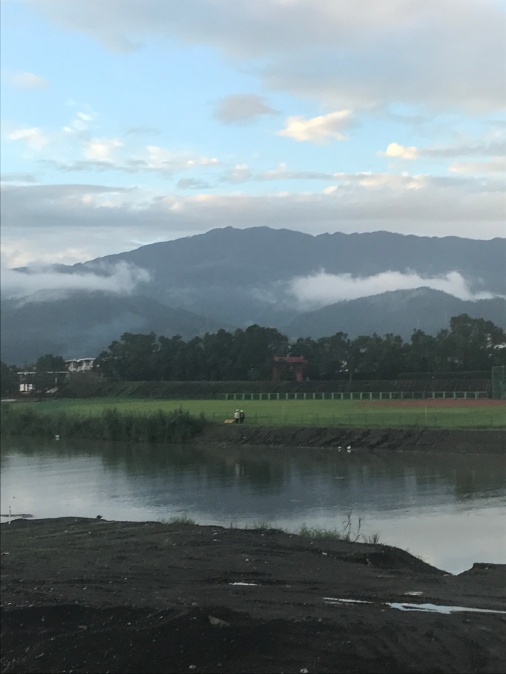 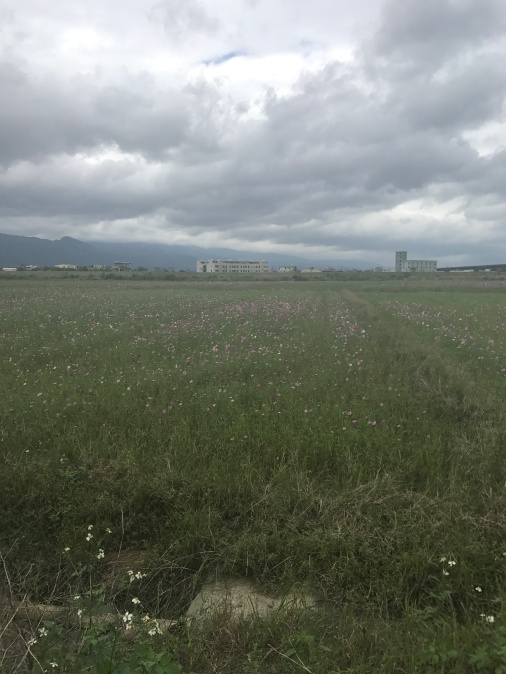 And, on a final note, I’ve been trying some of the different snacks here in Taiwan.  One of the strangest, yet surprisingly good things I have tried is a spicy ramen cookie.  It’s made out of noodles, and it tasted like flaming hot cheetos.  Not bad! 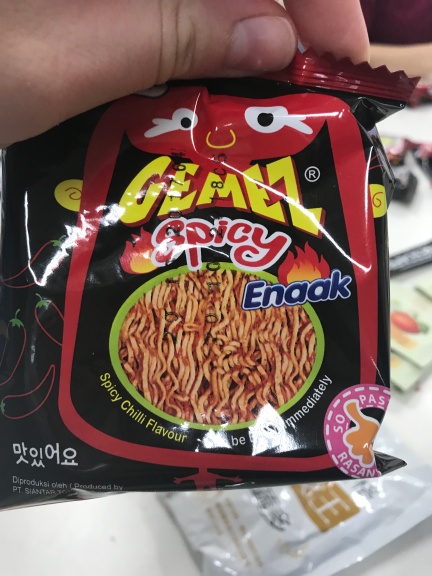