I can’t believe I’ve been in Taiwan for almost two weeks!  Now that I’m finally starting to get settled, I thought I’d share some of my thoughts since arriving.  Everything here is so new and different from what I’m used to at home. I keep trying to take notes on my phone of things that stand out to me.  Sometimes I get frustrated because there is so much of this experience I want to remember and share, but I know it’s impossible to take note of everything that I have seen and done here.  There’s so much to see and do and take in that I bet if you asked five different people what stood out to them the most about being in a new country, they would come up with five different answers.  I know I won’t be able to articulate all the thoughts and experiences I’ve had since coming here, but I want to share some of the experiences that stand out to me.

First off, the fifteen hour flight from Chicago to Taipei was a bit long.  I didn’t sleep very well, probably because of nerves, and the jet lag hit me hard for the first few days.  We got off the plane, met our awesome coordinator for Yilan county, Kelly, who herded us all onto a bus, and off we were to Yilan county where we will be teaching for the next year.  As we drove past Taipei, I caught a glimpse of Taipei 101 from a distance.  Can’t wait to go visit the city properly! 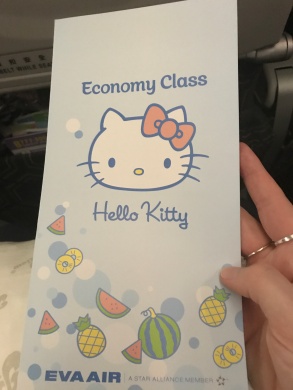 Our plane was Hello Kitty themed! 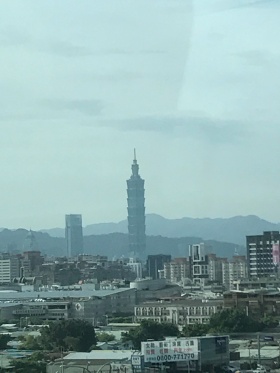 Taipei 101 in the distance

The first few days were a flurry of paperwork, unpacking, visiting schools, and scooter practices.  Walking around in a new city, I felt like I was having sensory overload.  I’m not used to living in an urban area, and I couldn’t read any of the signs because they are all in Mandarin.  However, after walking around town for the past two weeks, everything is starting to become more familiar, and I’ve become a pro at dodging people on scooters. 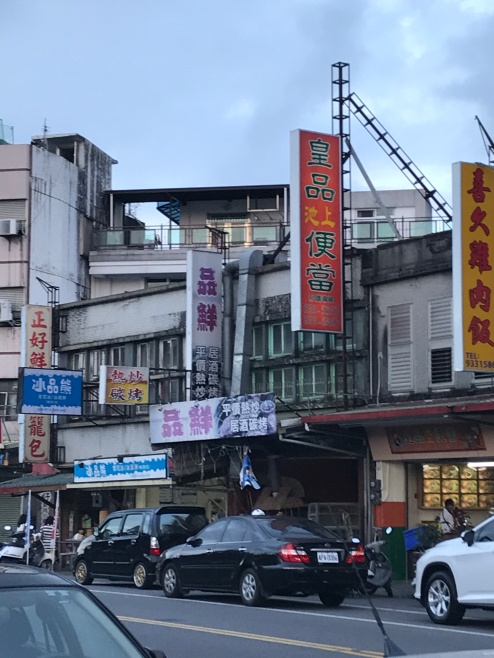 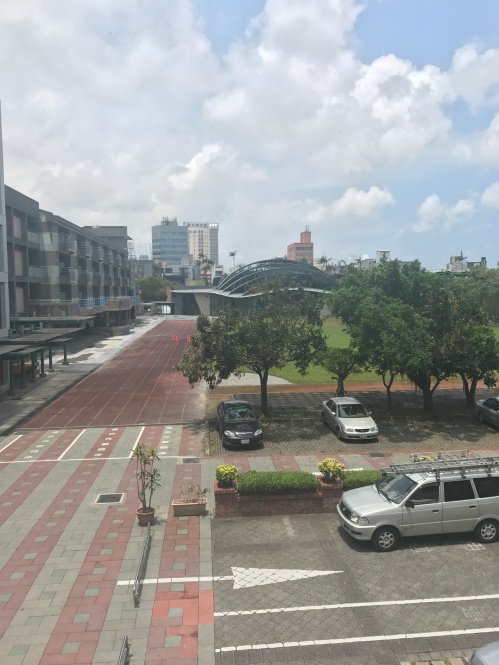 The view from the second floor of the Teacher’s Center where we are having orientation.

Although Yilan is a county with a lot of rural area, two of its main cities, Yilan City and Luodong, have urban vibes.  These are the two cities in Yilan County where the ETA’s are living. As Ross, a former Yilan ETA explained to me, Taiwan is a small island the size of Maryland, and a lot of that area is inhabitable mountains. There are 23 million people living in Taiwan. Because of that, even in more rural counties people congregate in small, dense areas, and cities pop up.

This year there are 8 ETAs in Yilan county. We are split between 3 apartments in Yilan City and Luodong, which are a short train ride from each other.  Right now I am in Yilan City for orientation, but people are potentially moving once we get our school locations.  We will live in the apartment closest to the school we are teaching at.  Below is the street where I’m currently living! 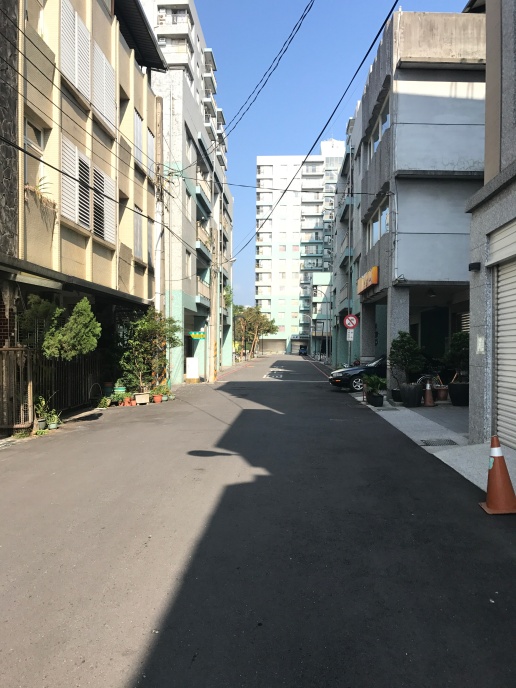 It seems like most people here dress casually and loosely because of the heat.  However, even in the summer it seems some people dress a little more conservatively than we do in America.

One thing I was not prepared for was the heat. Everyone told me it would be hot when I got here, but I didn’t realize just HOW hot they meant.  Many days its 90 degrees with humidity by 9am.  But hey, I’m adjusting!

You thought I was kidding, didn’t you?

Taiwan is also a big small business place. The Taiwanese take their food seriously, and small restaurants and food shops are found on every corner. Which is good, because it seems like most people here eat out for a lot of their meals, ourselves included! There is a breakfast place I found about a block away from our apartment where I can get this omelette/pancake thing for less than one American dollar.  It’s delicious!  And, I’ve rarely seen forks and spoons here, so I’ve been getting a lot better at using chopsticks.

Highlights of the last few weeks have included visiting both the Luodong and Yilan City night markets, surfing at Wai’ao beach, and finding some good American-style pizza and margaritas at Drifters.

Darn my eyes are closed. But you can see Turtle Island in the background!

Well, those are some of my first impressions of Taiwan! I find out my school placement tomorrow (or today, depending on when this gets posted), and can then finally begin getting ready to teach. I’m sure I’ll have lots of exciting stories to share once I start my job!

Clockwise from top-left below: A yummy Korean restaurant, Drifter’s Pizza, Yilan City train station, my first glimpse of a night market in Asia, selfies with the other ETA’s, experimenting with night market food, and pizza at the beach. 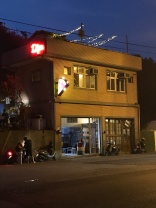 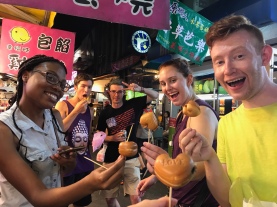 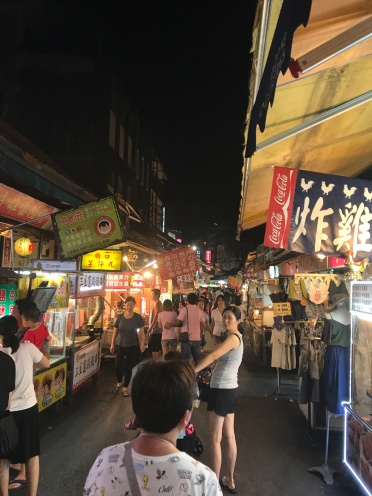